There are lots of questions we get asked each weekend so hopefully we can answer some of them right here for you in detail:

Paintball is an adventure sport that has been played throughout the UK for over 25 years. Originating in America, paintball is a strategic game that uses gas-propelled markers to fire small gelatine-skinned paint pellets at opponents. Paintball has developed exponentially, both in popularity and technology, since it’s humble beginnings in the early 1980s.
Today paintball is considered to be among the fastest growing sports in the UK, with over 1,000,000 new paintball players each year. Due to the rugged nature of paintball, protective goggles are necessary throughout the game and various safety guidelines are implemented to ensure the safety and comfort of all players. Other protective equipment available at Combat Zone includes full-length combat suits with padded collars, body armour and armoured gloves, although these are not compulsory.

Paintballing is a safe sport providing all players abide by the site rules. The main rule being safety masks are to be worn at all times. Statically paintballing is safer than golf!

All of the games are run and monitored by our trained staff.

Doesn’t it hurt when you get hit?

Being hit with a paintball would be liken to a hard flick on bare skin, although when running around which adrenaline pumping through your body sometime you wont notice you have been hit.

Very close shots can cause a bruise, this is why all of the games are marshaled by our trained staff. We ask for a minimum of 6m shooting distance from players. Closer than this, we have a surrender rule which awards bonus points for teams.

Is there a minimum age requirement?

The minimum age for standard paintballing is 11 years old and in year 7 at school. For low impact players must be aged 8 or over.

How many people do we need for a team?

With paintball, it is often a case of the more the merrier. On site we generally run about 30 players per field. This gives a good balance of teams without saturating the playing field. The groups of 30 players are generally made up of a mixture of groups meaning you will play anlongside some of the people you came with but also against others. We try to keep groups of three and below together as a rule and on some days all groups will stay together it is dependent on what will create the best day for all involved.

What clothing do we need to wear?

At Combat Zone Paintball we provide everything that a player will need, with the exception of footwear.

We recommend loose comfortable clothing and sensible footwear, preferably something with ankle support as the site has uneven ground.

We recommend not wearing too many layers of cloths and players will get very hot running around.

Can I bring my own paintballs?

NO. Only paintballs sold on site may be used on that game day. In this way we can ensure that they not only meet all insurance and health and safety standards but are also fully biodegradeable. So for safety reasons any players bringing their own paintballs onto site will be immediately ejected – No refunds will be given in these circumstances.

On site we have our of paintball warming facilities. If paintball’s get too cold, they become very fragile, this mean that paintball can break in the barrel of the marker when fired. Also cold paintball develop ‘flat’ spots on the balls, this means the paintball will not travel straight. By keeping the paintball’s at a certain temperature control by us this ensures these problem will not occur.

How many paintballs will I need?

The amount of paintball’s used varies from person to person. The average used is between 300-400 per half day. So between 600-800 on a full day.

Will our group all play together?

This is a very common question. As a rule we split all groups who arrive into 2 teams. This means you will always be on the same field as your friends, but you will also get to play against them. If you are a very small group of 2-3 players, we would never ask you to split up.

We have found over the last 20 years that this rule means all of the teams are then evenly matched, age ranges are simular on both teams as are the amount of paintballs (there would be no point putting a group who only has 200 paintballs each against a group who has 1000 each as this would not be fair). It also stops the ‘us and them’ mentality. This leads to fairer play and evenly matched teams.

If you do wish to stay in your own group all on the same field, we will cater where possible.

If you wish to have your own private field, solely for your group then please see our private party section.

Will adults and children play on the same fields?

As a rule, Yes. We have found over the past 20 years that adults and children (under 16’s) play very well together. This means parents can play along side their children. We would never play a group of children against a group of adults though. All groups at the start of the session are split equally so the amount of over 16’s and under 16’s are the same on each team.

If we feel that a group of adults are not suitable to play with under 16’s then they would not play on the same field.

If we have many groups in, we try where possible to put all under 16’s onto their own field. 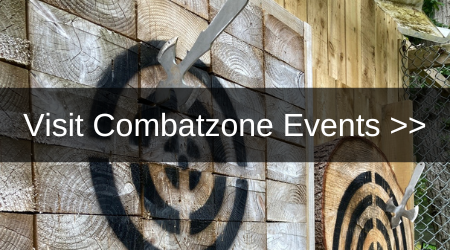 GIVE US A CALL

Combat Zone Paintball is Lincolnshire's Premier paintball site. Catering for all players from aged 8 upwards. With over 20 acres of paintball maps each uniquely designed.